Lucas Entertainment has delivered a vampire-parody with their 4-part Barebackula. Starring Damon Heart as the Count, and James Castle as Jonathan Harder, each scene also features other performers including Alex Kof and Dylan James.

Scene one begins with British attorney Jonathan Harder (James Castle) arriving in the far-off land of Truvadia. He finds himself at Castle Bare, the home of Count Barebackula (Damon Heart), who greets and shows him his ancestral house. Barebackula is an eclectic fellow, and he keeps a harem of quiet and dark-eyed men, all of whom Jonathan finds himself enchanted by. It quickly becomes apparent to him that there’s far more going on than everything seems, as he watches two of these men fucking at the command of the count. Jonathan Harder watches on as Alex Kof and Dylan James engage in limitless carnal pleasure. In the scenario Alex shows Dylan how to ride his intimidating nine-inch uncut dick. Dylan, in turn, gets Alex on his back for balls-deep penetration. 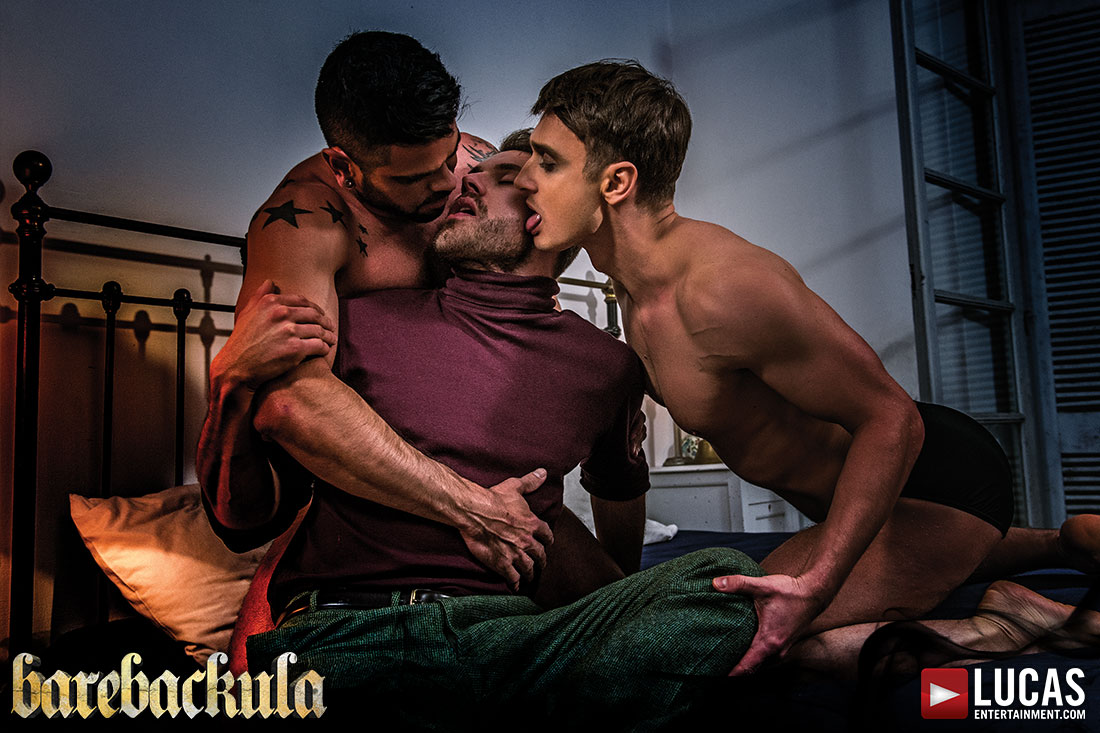 In scene two we learn that the dark servants that populate Castle Bare do more than serve the household needs of Count Barebackula. They’re permitted to mingle and play with each other, but when the needs of the count call, they must obey. The count may be the ruler of Castle Bare, but when his sexual commands are fulfilled, he calls upon the strength of his minions to control and subjugate him. Damon Heart as Barebackula summons his dark servant Dylan James to fulfill his nightly needs for sex and seed. The count gives over his throat and ass to earn his minion’s cum… and to seduce the unwitting British Attorney Jonathan Harder.

Scene three teases the final climax between the Count and Harder even further. Barebackula is slowly wearing his guest down, but not by himself just yet. For one last scene the Count sends in his demonic servants Mario Domenech and Alex Kof. Jonathan can not resist and submits easily. Just the presence of Mario and Alex compels Jonathan to strip down and give himself completely! There’s no sexual act the demons don’t seduce Jonathan with. He can’t control himself — and he doesn’t want to. All the while, the demons are preparing him for their master.

Finally in the last scene the Count and Harder are brought together. Jonathan must now choose to flee the castle or submit to the Count, and the Count has much to offer too much to resist, the Count himself for eternity.

Watch out Barebackula on Lucas Entertainment