Suckers is a full-length film from earlier 2015 featuring French vampires. Ridley Dovarez’s Suckers makes a nice addition to gay vampire films, however without any subtitles and my terrible understanding of French, most of the dialogue was lost on me. Not that it matters.

Ridley promotes rougher sex, if you’re into that, and this can be found throughout Suckers. Vampire Tiron (Jordan Fox) is prowling the streets of Paris in search of blood, and much more. He takes several victims this night, and turns two (a vampire hunter and a beautiful twink). 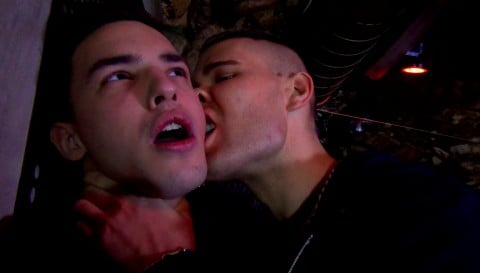 Overall it’s a good video featuring fanged vampires. I did find the humiliation a dull part of the sex. I can understand a little torture of the vampire hunter, but the way he treats twink Kevin Ass is odd, particularly the light kicking. After the sex Tiron breaks the twink’s neck off camera, but he returns in the final scene as the vampire’s plaything. A single bite turns the hunter, but the twink’s turning is less immediate. And we only see Kevin with fangs are very end just before the credits (see below).