The latest vampire film to hit cinemas had an interesting opening weekend, coming first during one of the worst weekends of the year. August is not known as a popular month for movie goers, and it might seem as if any film dropped in late August was intentionally doomed.

The Invitation opened with over $7 million.

Starring Nathalie Emmanuel as Evie and Thomas Doherty as Walter, The Invitation presents a new take on the Dracula subgenre of vampire films, focusing on the brides. Evie, having lost both her parents, takes a DNA test that connects her to forgotten family she didn’t know existed (and neither did the lost relatives). Convinced by her new cousin, Evie is flown to England to attend the weeding of one of her cousins hosted by the dashingly handsome lord Walter. Seduced by the sexy aristocrat, Evie soon finds herself trapped in a family destiny that she seems determined to escape from.

Overall the film is well done and offers beautifully fanged vampires. Lord Walter is a youthful and handsome embodiment of Dracula (though that bit is unsaid), a far cry from previous incarnations of the famous vampire. Sadly Evie’s choices throughout the film, and toward the end, feed into the typical vampire movie trope. 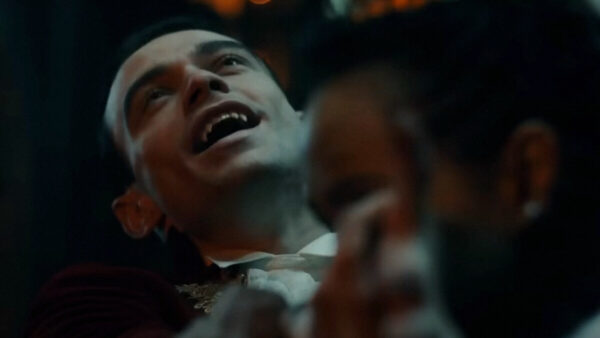 Watching the film, I had two thoughts. If it were me in that situation I would have said yes to Walter right away. And where were the queer characters? Dracula was groundbreaking and controversial for the repressed Victorian era. This story set today with modern norms, could have taken a different direction from the constraints.

The story presents Evie as the last surviving female from the Alexander family. The writers could have avoided bringing her entire character into the heteronormative storyline by instead having Walter look towards one of the Alexander men (there was at least one cute guy in the background of Evi’s welcome scene). I guess that would go against the premise that these women are subjugated and in service of the male vampire, giving us the potential for an equal (maybe the two brides would object).

Watch The Invitation in cinemas now or wait for it to be available to rent!