The original Lost Boys was a genre redefining vampire film that remains a great cult classic today. It was also a turning point for teen vampires, but it was not the first or only vampire film to create the genre in the 80s.

The Lost Boys presented perfectly 80s vampires. They were sexy models who could have been puck or metal rockstars. Before them, vampires were either monsters or classy older gentlemen. Fright Night came before The Lost Boys, adding to the vampire genre of the 80s, and affectively creating teen vampires. In most ways it was a typical vampire film, but it was also evolutionary.

Vampire Jerry appeared as a gentleman, sophisticated and worldly, but a monster when he turned. He sired several teen vampires in the film, including a tender embrace with Edward (Evil Ed). Most vampire movies at this point were all adult centric. And we hadn’t seen teen vampires up until now.

Two years later The Lost Boys appeared, and the teen vampires took over, at least until the final twist. There wasn’t (initially) an adult vampire turning teens, instead the teens were doing the turning. Since the lead characters in both The Lost Boys and Fright Night were teens themselves (never mind the age of the actors), these were teen films with their own issues. Take out the vampires, and Michael has simply joined a gang. And if Jerry is not a vampire, is he attacked by Charley for appearing to be gay?

Some have pointed out the the 2011 remake was homophobic in that it removed the gay characters entirely, but the original Fright Night used vampires as proxies for gay men (Jerry and Evil Ed), and then the film was about killing them. Unlike The Lost Boys, these vampires are less sexy, and more grotesque. And Charley becomes obsessed with the new vampire (gay) neighbour, either echoing society’s mood or his own suppressed feelings.

Both films used vampires to tell allegories about teen issues, a key characteristic for most future teen vampire movies. 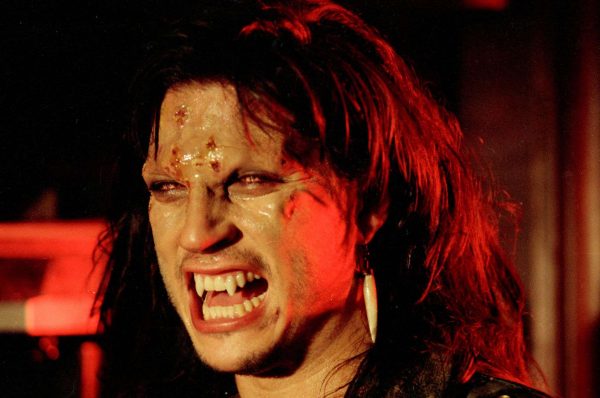 The Lost Boys was a summer film, premiering on July 31, 1987. The Monster Squad came out weeks later, although these were kids and none of them became vampires. October started with the release of My Best Friend is a Vampire, a vampire film that leaned far more on comedy. Also pre-dating The Lost Boys, Once Bitten released in 1985 played along a similar vein to My Best Friend is a vampire.

Teen vampires after The Lost Boys

Teen vampire movies continued to be released in the decades after Fright Night and The Lost Boys. There have been comedies, dramas, romances and fantasies. No one film after captured the same perfection contained in The Lost Boys, though a few have defined their own paths, such as Buffy the Vampire Slayer, or the hard-to-find Frostbitten.

Sadly the teen vampire genre also took a hit in recent years with the introduction of the blockbuster fangless vampires of Twilight. This created a vampire draught that may only just now be going away. In recent years we’ve had Vampire Academy, Freaks of Nature, Vampires vs. the Bronx, and Black as Night. Each in its own way has shown teens struggling with some issue but using vampires in disguise.

My Best Friend Is a Vampire

Vampires vs. the Bronx